It was certainly expected that Apple would reveal its new generation of A16 processors with the arrival of the iPhone 14, and it is also accompanied by some improvements that make it faster and more efficient. However, given the recent rumors, that may not be the case.

According to the analyst Ming Chi KuoThe future generation of Apple’s A16 chipset, which will be found in future models of the iPhone 14 line, can remain on the 5 nm TSMC architecture – that is, the same as in the A15.

It is believed that Apple could have decided to keep the architecture because TSMC would not have the ability to produce enough units of the chip for market, which could affect sales of the final device. In this way, the company avoids potential problems, but at the same time maintains an outdated and less efficient architecture. 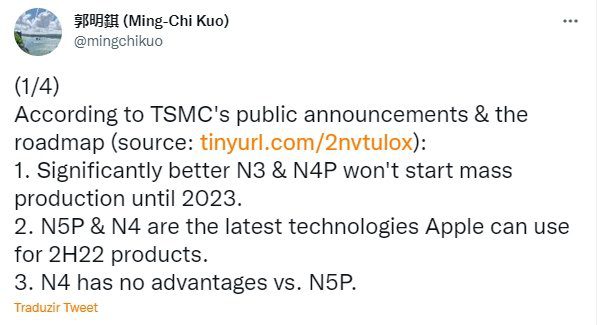 It is important to remember that the integration of the new A16 is expected only in the more advanced models of the line, perhaps the Pro models and above. Input models should maintain the A15 chipset that was already in the previous generation of devices.

This is definitely not good news for anyone who is expecting the Apple A16 to be released with significant improvements in performance and efficiency. Some are still expected, but it’s far from what would be possible with a new infrastructure.