One criticism of the iPhone’s architecture has to do with its complex architecture, which makes it difficult to repair any component. In fact, this criticism prompted the creation of channels on social networks to pressure the company to solve the problem. The company has often been singled out for wanting to make it difficult to place “non-certified” parts by their own certified repair teams. However, quietly, Apple has redesigned the iPhone 14.

According to the “experts” evaluating the internals of these devices, the iPhone 14 disassembly reveals “the most substantial redesign since the X”. The video shows the reason for this classification.

The iPhone 14 has arrived and it doesn't quite impress the critics. Despite bringing some interesting assets, the exterior looks nothing to its predecessor. but, According to iFixitInside revolution.

Apple has completely redesigned the interior of the iPhone 14 models to make the repair process easier. It's the most significant change in iPhone design in a long time.

The iPhone has always been notoriously difficult to repair. Its interior is an intricate interlocking structure of parts that requires proprietary tools and a steady hand to perform even basic repairs. The iPhone 14 redesign wiped out a lot of that.

The smartphone has a completely new body with a thin layer of metal in the middle that allows easy access to both the front and back screen. It can be opened from the front or the back, making screen replacement and rear window replacement much easier than in previous models.

According to iFixit, the phone's back glass is held together by a single connector and two screws.

If we compare the interior of the iPhone 14 with iPhone X, X is a nightmare to be fixed, but this new is the "work of watchmaking". That is, the iPhone X had adhesive all over it, and the adhesives were so strong that chemicals, force, and even heat had a hard time releasing the component.

According to the website, Apple welded the camera lens to the protective glass on the iPhone's 10th anniversary, which added additional complications. The best way to get into repair shops from behind is to use a laser to melt the adhesive and then break the glass and carefully scrape off the resulting dust. It wasn't exactly a do-it-yourself process! 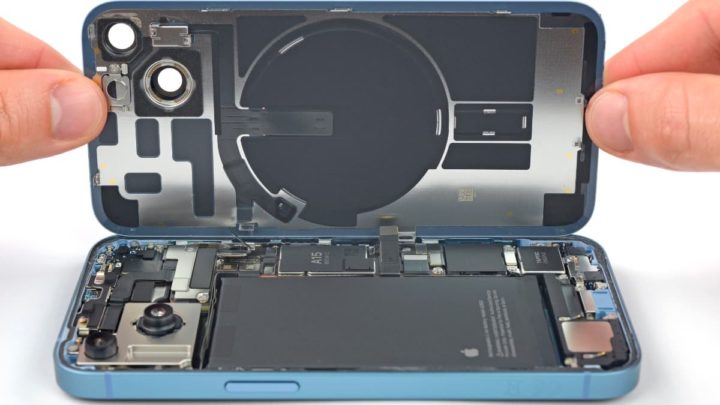 Apple started selling parts and even a "repair kit"

last year , Apple announced that it will sell spare partsand tools and guides that will allow people to perform basic repairs to their phones. It was a huge change for a company that has long had a monopoly on repairing their iPhones.

A few weeks ago Apple Expand this new DIY system It provided more tools and guides to help people fix more smartphone items. The new design of the iPhone 14 appears to be another step in the right direction.

But there is more work to be done. As iFixit noted in their phone repair review, Apple still requires pairing software to replace some components, like screens. In fact, it was talked about in the iOS 16 demo, during some beta builds.

Of course, Apple didn't make the changes it did out of kindness. Behind this change in investment and policy is pressure from investors, clients and even government authorities. US President Joe Biden endorsed right to algebra In an executive order earlier this year, it ordered the FTC (the US regulator) to open investigations. The EU is also lobbying and passing legislation to end reform monopolies.

See also  Can't Browse Microsoft Sites With Firefox? there is a solution