Audi’s bet on electric cars is increasingly becoming a reality. The brand is already introducing its first 100% electric offering on the market, which indicates that this will soon be the only way the brand will have to develop and introduce new cars.

With a strong presence in motorsports, Audi wants to revolutionize the electric field. It looks like the next bet will be off-road vehicles, as the brand wants to be the first to win the Dakar Rally in 2022.

Audi's big bet for 2022 appears to be the Dakar Rally, which the brand will attack with the new RS Q E-Tron. This will be the brand's first all-terrain-focused proposal, being not a 100% electric car, but a hybrid car, which will benefit from the combustion engine, with high performance and efficiency.

This model results from the need to be able to cover large distances at each stage, without wasting time charging the batteries. It receives these loads from running the engine, which will operate at its optimal and most efficient revs (between 4500 and 6000 rpm).

The RS Q E-Tron is built from scratch and is not based on any of the brand's cars. It will be a complete bet on today's toughest rally, which is also the most demanding for both cars and drivers.

The RS Q E-Tron's entire chassis has been engineered to make the most of this platform, not just in terms of mechanics. Its build uses most of the brand's know-how, in the hope that it can later be used to produce electric cars. 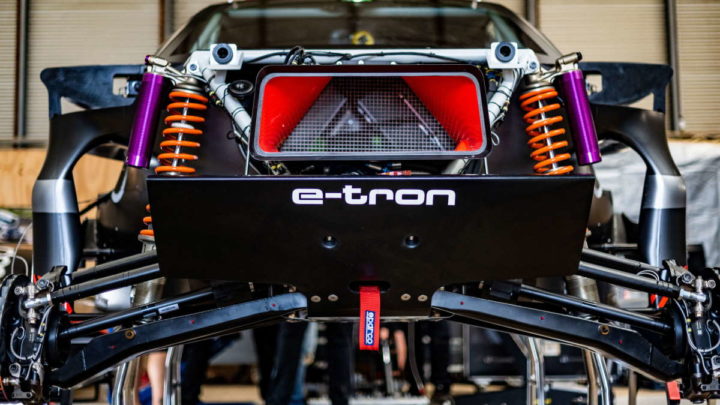 With the RS Q E-Tron ready, Audi now wants to test and prepare its first all-terrain offering. Thus, he hopes that his rival car will be evaluated in the many rallies that will take place during 2021, heading to Dakar next year.

Although this Audi hybrid is not 100% electric, it has an important responsibility. The company wants to compete to win the biggest rally on the planet, showing that it can be a more environmentally friendly alternative, while maintaining the high levels of competition that this event requires.