2021 marks a leap in the budget of the Santa Catarina State Research and Innovation Support Foundation (Fabesque). The investment amounted to R$153,467,400.00 – which is three times the previous year. The value indicates the public notices that have been launched and that will be implemented over the next few years. In addition to being unprecedented, this amount will allow the realization of new projects in science, technology and innovation (CTI) in all regions of the state.

The head of Fapesc, Fábio Zabot Holthausen, highlights that 2021 has been a positive year for the institution, despite all the effects of Covid-19. “We had the largest investment in history. This investment reflects the value that the state places on this ecosystem. It demonstrates the relationship that the state government and FAPESP are creating with universities, businesses and with the entire productive sector,” he affirms again.

Another highlight in 2021 is the number of notices. FAPESP set a new record, for the second year in a row: it reached 50 public calls. In 2020, the number was already unprecedented, at 34. “This large number of public notifications reinforces the importance of science, technology and innovation to state government and Fapesc,” Holthausen continues. 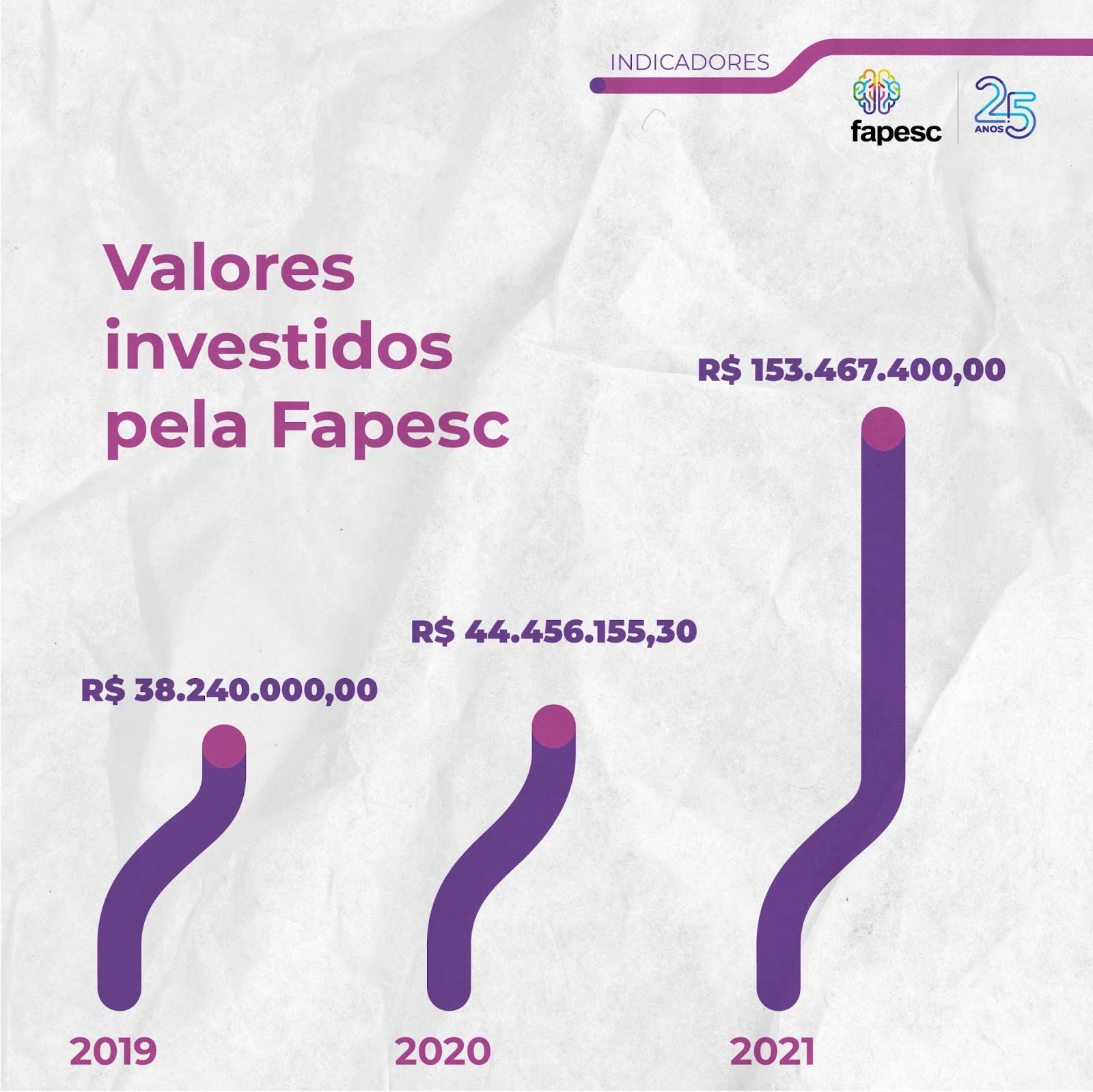 The Minister of Sustainable Economic Development, Luciano Poligone, takes the opportunity to reinforce the importance of FAPESP as the government’s arm for the development of research and innovation. “It invests in knowledge that, combined with technology, finds solutions, improves people’s lives and adds knowledge. The leap in investments made this year, without a doubt, will bring more results for Santa Catarina, and it is already a reference in innovation,” he explains. .

Fapesc’s Director of Science, Technology and Innovation, Amauri Bogo, underlines the Foundation’s team’s commitment to turning these resources into public calls for bids that cater to the entire Santa Catarina CTI ecosystem. “We’ve had a year of hard work and every area of ​​Fapesc is committed to delivering the best results, even in a short amount of time. This effort will be rewarded in the coming months and years with important projects,” he concluded.

CTI Events Management, which is also responsible for granting research, technology development and innovation, launched 20 notices throughout the year, resulting in an investment of R$104,424,400.00. The value is R$850 more than that applied last year. Until then, the average volume of investment in stock exchanges was about R$10 million annually, with a peak of R$30 million in 2017.

One of the most awaited notifications of the year was New scholarship course, which will include new researchers from March 2022 to February 2026 – there are 744 master’s and 190 doctoral students. The total investment on this notice was R$56 million, the largest in Fapesc history. Another novelty is the increase in scholarships that will be in effect from next year, which will amount to R$1,800.00 for masters and R$2640.00 for Ph.D. 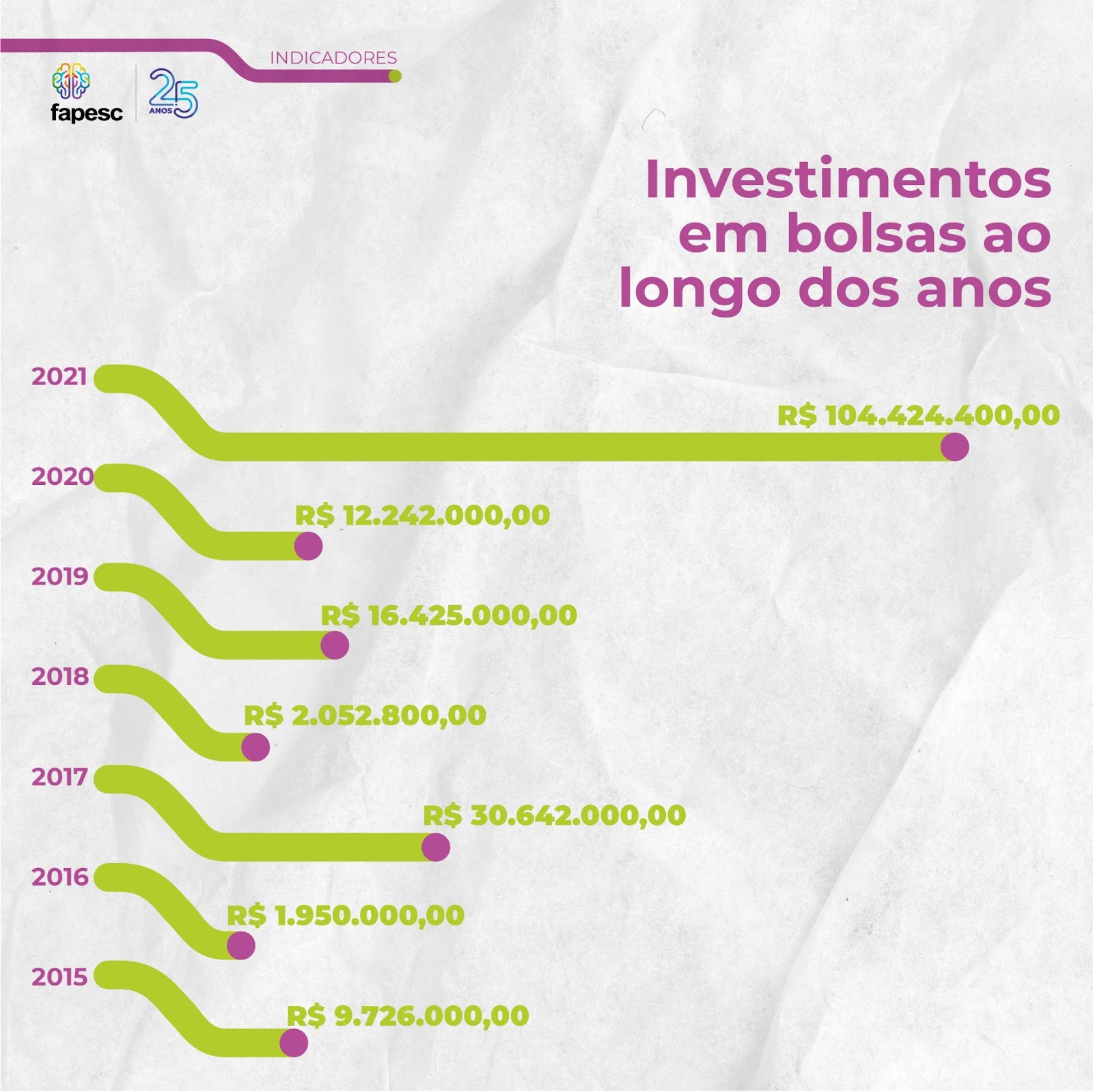 a Foundation also invested In Partnership with the Coordinating Body for the Improvement of Higher Education Personnel (CAPS) R$8,790,000.00 for Emerging Postgraduate Courses which are standardized across the state. A total of 187 scholarships were awarded: 137 for master’s, 40 for doctoral, and seven for post-doctoral: “Fapesc, with a focus on training professionals to develop CTIs in 2021, has made significant progress in enhancing academic scholarship. Significantly, for all public nonprofits and special,” says CTI Events Director Ana Paula Neto Carneiro, who is also responsible for scholarship notices.

FAPESP has also played an important role in introducing science and technology into government governmental bodies with the programme # Fapesc @ Gov + Research and Innovation. For the second year in a row, it enabled the selection of grantees to work in various public bodies such as the Projects Office (Eproj-SC), Santa Catarina State University (odesk), a Minister of State for Administrative Affairs (sea) e Sustainable Economic Development Secretariat (SDE).

The novelty of 2021 was due to the launch of Katrina People Program, also from the state government, which includes various secretariats. The goal is to combat inequality between municipalities and improve people’s quality of life. FAPESP has contributed with eligible grant holders to help implement these projects. They are professionals from different regions working in seven cities.

She’s about to turn 25 FAPESP has also invested in creating investment impact indicators Made over these years in science, technology and innovation. For this, he launched a public notice to map the CTI ecosystem. 25 books will be published dealing with various aspects, including the work done by the institution itself. 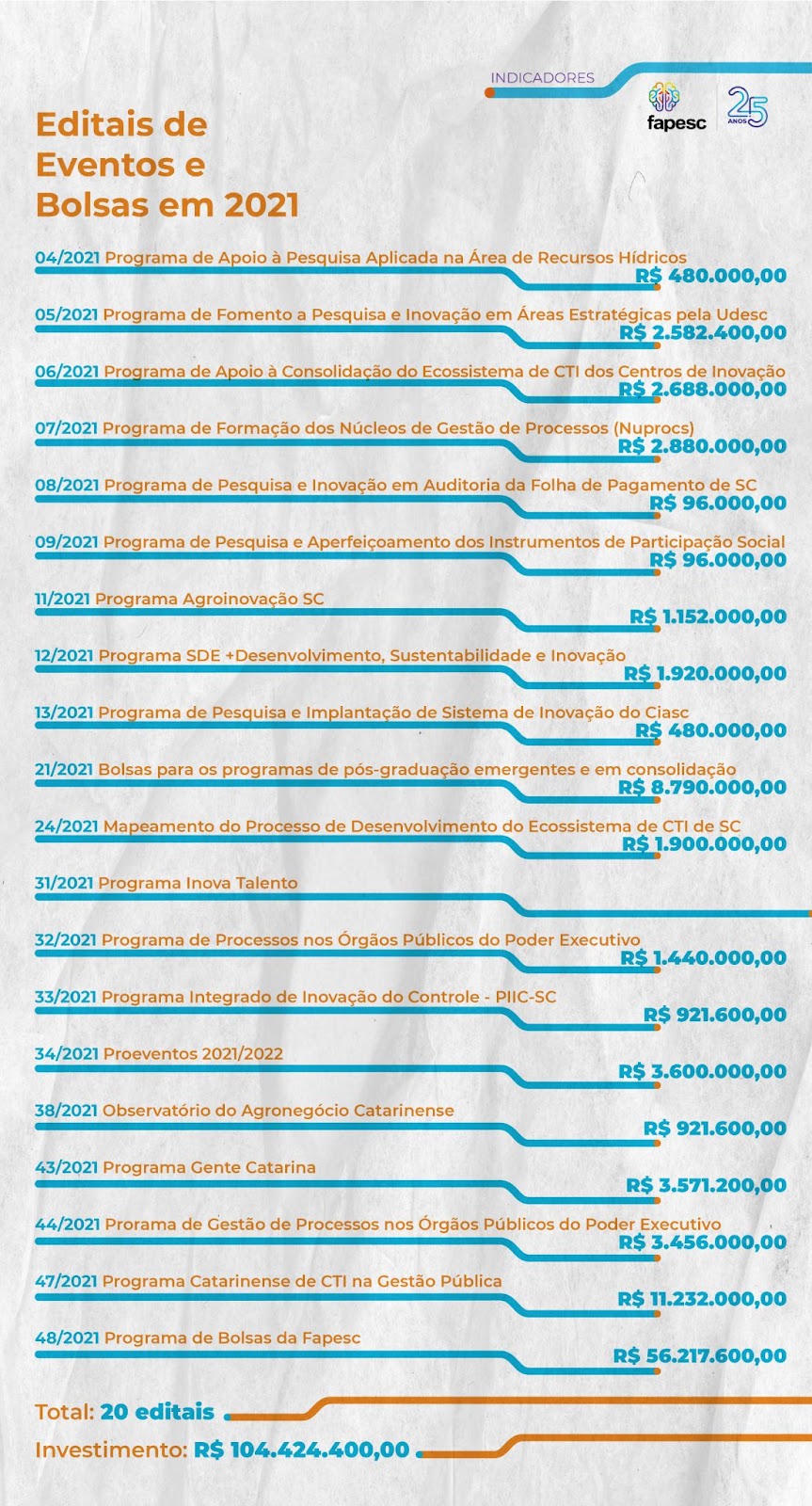 Innovation has received the largest investment in recent years by FAPESP, especially with the launch of new programs. In all, there were 10 public notifications, resulting in R$27,387,000.00 availability throughout 2021. One of the new programs is Innovative university leadership, which will enable the business of completing the course to be transformed into new companies, products or services. The investment is R$ 9.5 million.

Considered a challenge to Santa Catarina, Training new developers is also a priority for Fapesc. For this reason, 4 million Brazilian riyals have been allocated to open 1.2 thousand vacancies in qualification courses in the field of information technology. In a few months, these new professionals will already be in the market.

Innovative entrepreneurship is another focus of the institution, which has maintained important programs from other years. One of them is Boy, implemented in partnership with Spra, which reached its second edition in 2021 with more than 500 pre-incubated projects in these two years.

Registration is now open for spark 2, a program in partnership with the Federal Government, which will invest 3 million R$ to open new businesses. 50 companies will be covered with R$60,000 each and another R$32,000 to fund a scholarship.

In addition to these programs, FAPESP also contributes to Activate innovation centers, which is doing important work to revitalize the CTI ecosystem in Santa Catarina. For the operation of these centers alone, the investment amounted to R$ 3.6 million.

“2021 was a very positive year for the FAPESP Innovation Zone. New programs were launched to strengthen the ecosystem connection. Another point to highlight is the efforts to increasingly promote entrepreneurship training. Work towards the development of Santa Catarina, which we left with great satisfaction for our contribution,” celebrates Director of Innovation, Gabriella Mager. 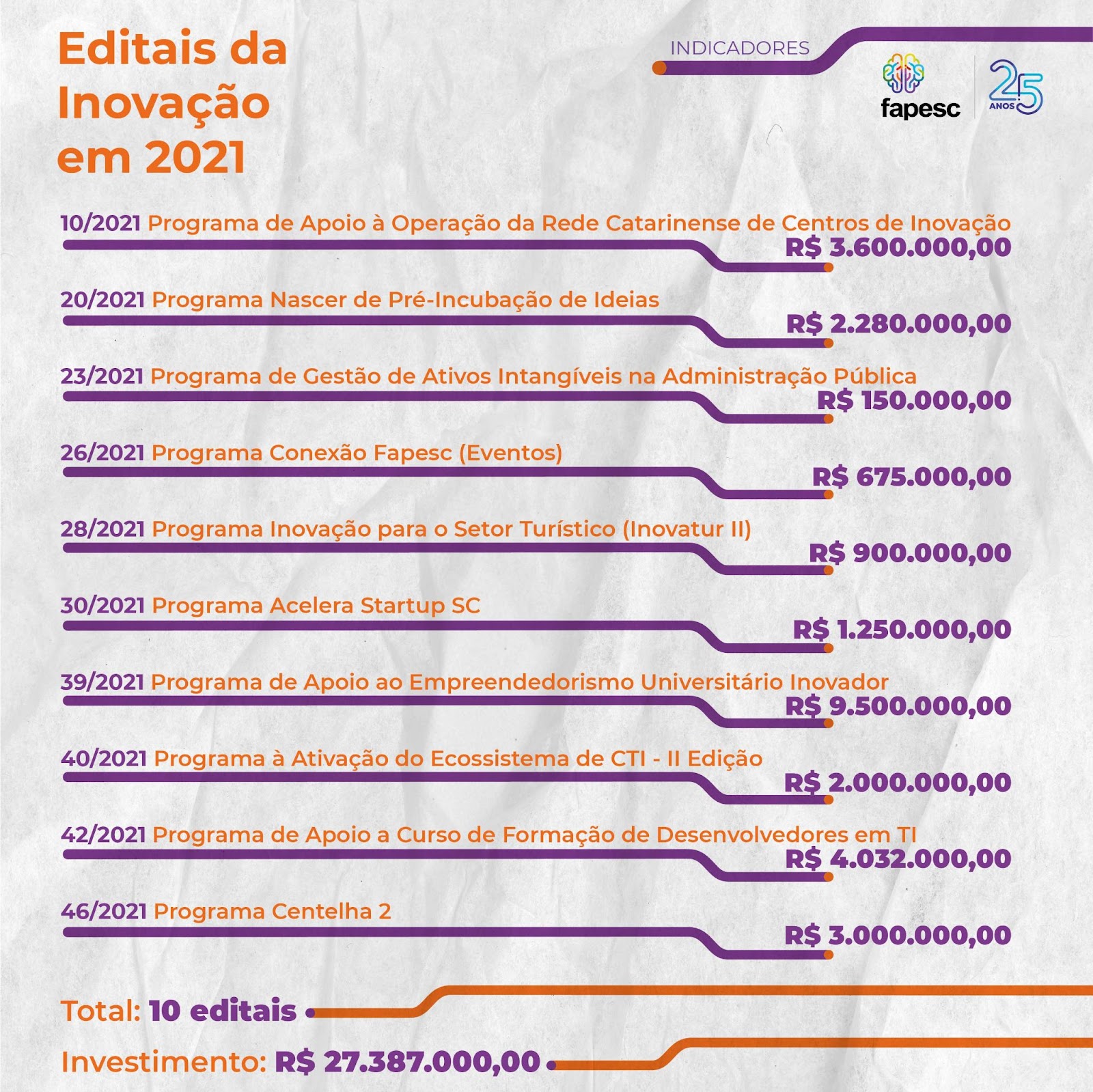 Investments in science and research throughout 2021 completed a significant cycle that began in 2020. This year alone, 19 public notices were issued, totaling R$21,656,000.00. However, it was implemented Supplements for public calls Highlights of the past year, such as the Global Research Program and the Covid-19 Studies. Universal Supplements totaled nearly R$4 million, practically doubling the amount invested in 2020 – which has now risen to nearly R$8 million. Public Notice 06/2020, in support of research related to Covid-19, saw an increase of 460%, from R$500,000 to R$2.3 million.

Added to this, there are also specific researches, such as 2021 Mineral Coal Valuation Program (1.8 million Brazilian riyals) and the program Supporting the valorization of grape cultivation and viticulture (One Million Brazilian Real) that gained fame this year.

Deborah Burnett, Director of Science and Research, considers the 2021 results to be excellent. “Today we have nearly 800 projects underway, all in different knowledge areas, covering all areas of the state. The outlook for 2022 is very good. We are confident that we will have a promising year again for state research.” 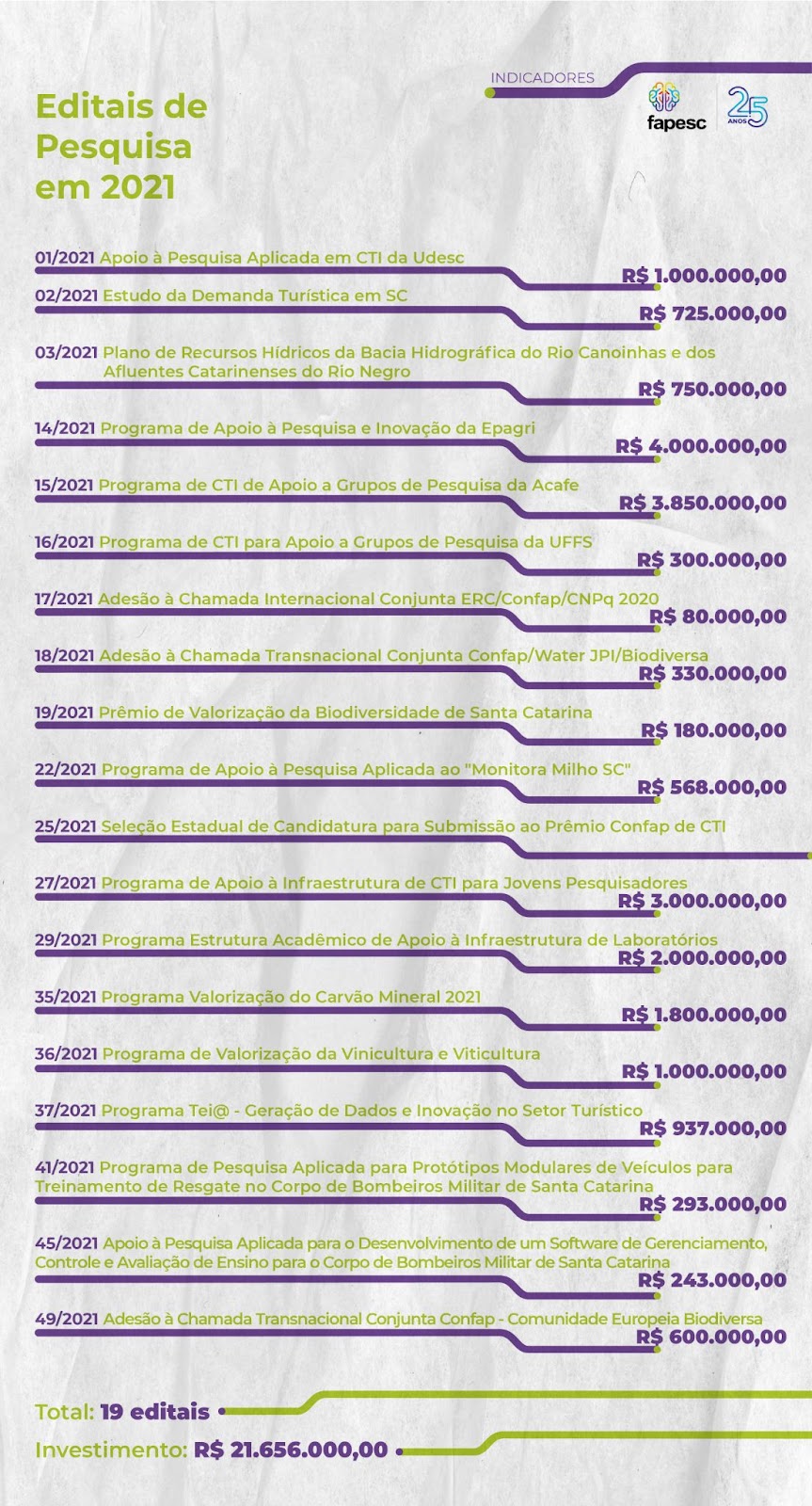