Among the 247 years since the founding of Campinas, State School Culto à Ciência has 149 years of active participation in the history of the municipality and primarily in the training of thousands of students. On April 13, the school celebrated another anniversary with a Pride of Education in Brazil, and on Monday, the 18th, the Secretary of State for Education, Renilda Pérez, was introduced to the Campinas Centennial Foundation.

Renelda Pérez, accompanied by the Director of the Education Department of Campinas Leste, Nevaldo Vicente, and Director Glauber Maldonado, praised the structure of the unit, which received 250 thousand R$ in infrastructure through PDDE (Direto na Escola programme).

“A school of this size, with such historic architecture and investments in education, like those we see in math, biology, chemistry and physics labs, enhances student learning, especially those in less favorable conditions,” Renelda Perez commented. 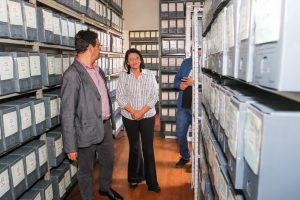 In its 149 years, the unit has welcomed students such as Alberto Santos Dumont – the father of aviation – actor Carlos Zara, writer and journalist Antonio Mendonca de Barros and Julio de Mesquita – journalist and founder of the newspaper O Estado de S. Paulo – among other eminent personalities in various fields of professional activity. Today, the school is part of the State Education System of the Ministry of Education of the State of São Paulo – Seduc-SP. In 1983, the school was converted into a cultural heritage site by CONDEPHAAT (Conselho de Defesa do Patrimônio Histórico). 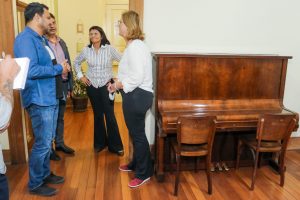 “The importance the school attaches to the people of Campinas is great. We had internationally renowned students, and for us, all students are equal in importance. This school and other units in Campinas make the municipality a reference for knowledge and science,” said Principal Nevaldo Vicente.

One of the rooms that caught the attention of Minister Renilda Pérez was the collection of medical records containing the school lives of all the students who studied at EE Culto à Ciência. “It is a commitment to the history of the individual and of education. Each CV of each student reinforces the great achievements of Culto à Ciência,” he said.

The unit is part of the Integral Teaching Program (PEI) and is an example in the school community and the people of Campinas. Its reputation refers to its historical context and its path, to keep pace with the transformations of the municipality, to its students who became great personalities in the country.

“Today there are 480 students working full time at Culto à Ciência. We have sons and grandsons of former students enrolled, students who passed through here in the 1960s and 1970s who still show affection and respect and maintain constant contact with the administration and the local community,” said Glober Maldonado. 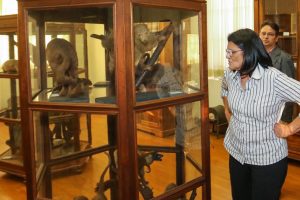 School differentiation, according to the principal, is the constant research in project formulation and mainly the performance of the management team, teachers and staff. “that they [equipe] We are fully committed to providing quality education to our youth. Everyone walks together in search of the best for the school and that is why it has survived in its historical context in terms of teaching quality,” concludes the principal.

“I am proud to be the co-director of this school unit. The education of Campinas, especially what is practiced in state public schools, makes a difference. I am increasingly proud to be able to participate in this educational process and I still count on Culto à Ciência, a century-old school of Zaman has quality teaching, management team, teachers and all staff,” continues the director.

Lancet study: Acute hepatitis may be linked to COVID-19 infection