At the store’s entrance, highlighted on the first shelf facing new customers, was the kiwi, advertised as “Suggestion of the Week.” Thus, Pingo Doce’s “Prices 2021” campaign was introduced, alluding to a return to pre-inflationary times, when virtually everything was cheaper.

The fruit appeared, on Wednesday, January 18, in one of the chain’s stores in Porto – but it happens all over the country – at an attractive price of 1.99 euros per kilo, at a discount declared “more than 35%”, which would be significantly reduced the original price announced About 3.15 euros per kilo.

What a less careful look would miss is that below the huge yellow label announcing the promotional price there is a small text of five sentences stating, with a character inserted on purpose of smaller dimensions – and that NiT, moreover, was able to immediately check – the requirements Customers to be able to purchase fruits effectively with the advertised discount.

First requirement: The campaign is only valid for purchases totaling more than 20 euros. The second requirement: that this batch of purchases that exceed this amount does not include the products of the “2021 Prices” campaign.

For all customers who did not miss the almost unreadable letters in the store – or who picked up the margins included in the various advertisements of the supermarket chain – the problem will be solved. But the truth is, many consumers missed the message that Pingo Doce delivered in the small print posted on the so-called kiwi.

The result, once again, tests the attention of consumers, who seem to need to redouble their attention and beware of lower prices: anyone who arrives at the box with said products and does not meet the specified requirements must pay the value of the 2021 prices, but the original value, much more expensive. No warnings, no alerts.

The campaign, which began on January 4, has since its inception drawn numerous criticisms from customers on social networks of the Jerónimo Martins chain. “Better read the small print because the prices for this campaign only apply if you make €20 in miscellaneous purchases that are not in the campaign. It’s a shame,” notes one customer.

“This way of promoting is really a disgrace,” another exclaimed. Another concludes: “The poor who don’t care, if they don’t do the math, they lose.” The reports focus specifically on the lack of clarity of information about campaign requirements, such as a customer who reported buying oranges on sale on two occasions, only to later realize that they did not total €20, thus paying the amount. original and not the campaign.

Complaints filed in Publishing From Facebook on January 4, repeated with each share of the “2021 Quotes” offer. “Misleading advertising” is one of the terms most used by customers. An accusation that does not surprise the consumer protection association DECO, which has analyzed the case in question.

We believe that such practices can be classified as unfair and misleading business practices, insofar as it is understood that they are likely to mislead the consumer as to essential elements – price and even the existence of a certain advantage in relation to price – which may lead the consumer to a purchase decision that I would not have made. in another way “.explains to NiT Ana Sofia Ferreira, coordinator of the consumer support desk of the association.

Campaign flyer posted on the site

Customer anger on Pingo Doce’s social networks was also reflected in the association’s mailbox. “Pingo Doce campaigns are decried by consumers who consider them too opaque. They claim they always have so many exceptions and so many special conditions that most customers are not even close to meeting the many requirements to enjoy the promotions.”

I still remember the throwbacks of the previous Christmas campaign that also infuriated the chain’s customers, who turned to social networks and DECO to make their voices heard. “We highlight, even if recent, consumer complaints and outbursts about a Christmas basket campaign that was deemed unclear, inappropriate, and less healthy,” the consumer protection representative recalls.

The association’s legal section notes, “A business practice can be deemed misleading when it takes into account all its characteristics and the conditions/constraints of the means of communication, and omits material information that, given the context, is essential to the average consumer making an informed transactional decision and thus leads or is likely to lead the average consumer to a transactional decision he otherwise would not have made.” He concluded, “The same thing happens with regard to practices that conceal material information, such as price, that present it in a way that is not clear, incomprehensible, ambiguous, or delayed.”

Let’s go back to the kiwi example. In this specific case, DECO notes, “the information is there, but not in a way that would make the consumer aware of it.” “In the specific case of the ‘Prices 2021’ campaign, it seems to us, moreover, that the list of products that are not counted towards the minimum purchase price is not available, and given this campaign condition, the consumer cannot complete the price for which he will be asked.”

This is exactly what happened with one of the reports that reached NiT that shows the difficulty many clients seem to have with these small print margins. Just in the box, when I noticed the high price of said kiwi, did alarms sound. “I questioned one of the employees, who told me the price was 3.15 euros per kilo,” notes Maria Martins, 63, a customer of the supermarket.

To remove stubbornness, they went to the exhibitor, where the employee indicated a small sheet with the price and terms of the campaign. “It was only when the clerk took out the paper and handed it into my hands that I could actually read what she said, otherwise these letters would have been impossible to read.” 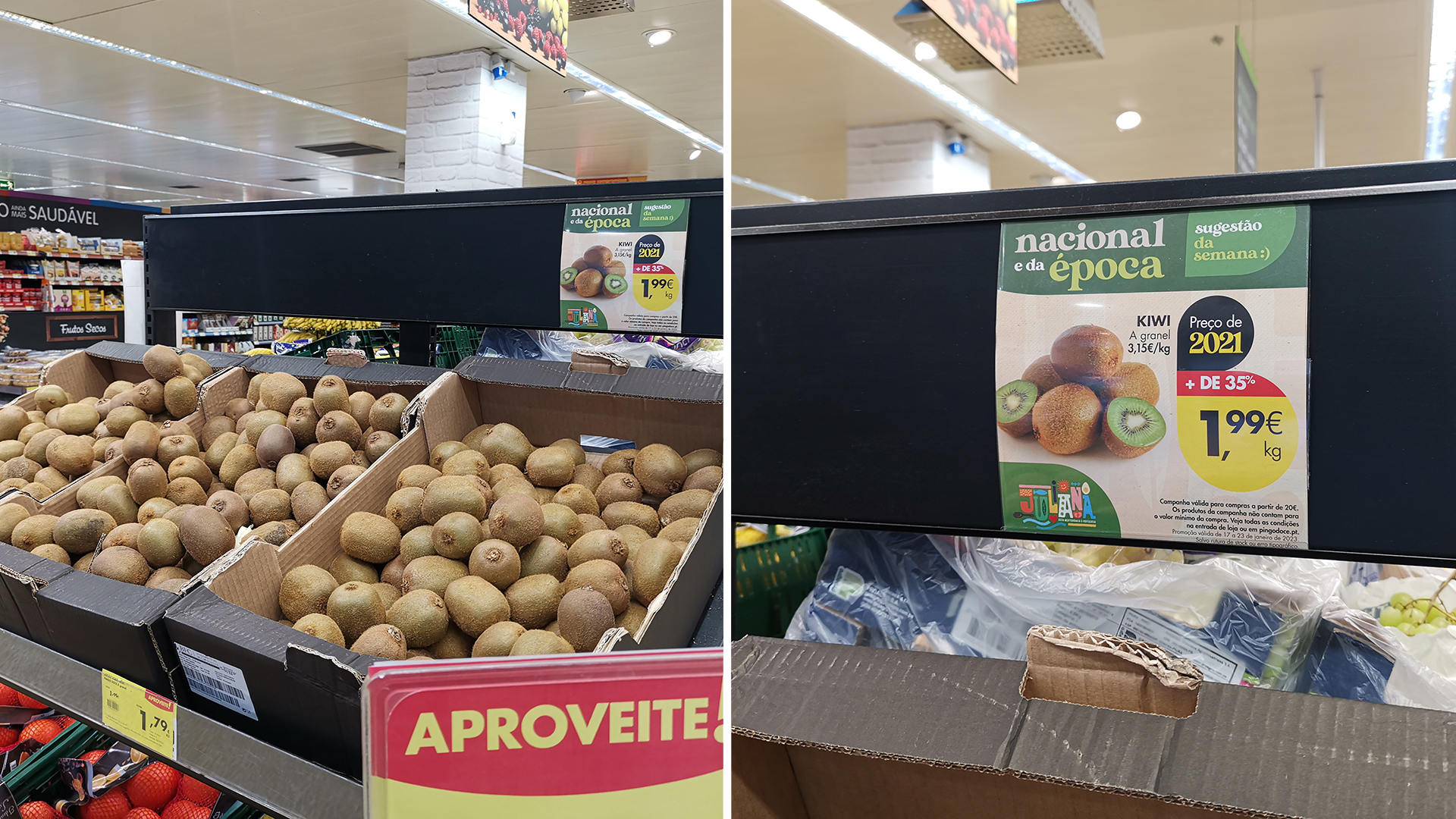 Campaign conditions can only be read from a few centimeters away

According to Ana Sofia Ferreira, this type of practice, in addition to “misleading consumers, undermines the comparability of prices”. Either way, the victim is always the same. He also leaves a note of this type of promotions that were frequent in the series of Jerónimo Martins: “We cannot fail to highlight that an excessive set of conditions and exceptions, as it turns out, has the effect of practically emptying the campaign, and can be seen by consumers on It’s a misleading campaign.”

In the face of criticism from its customers, as well as the conclusions reached by the Consumer Protection Association, the company limited itself to clarifying that the “2021 Prices campaign” is announced in publications, stores, radio, website and television, and this “clear” defines the requirements of the campaign. NiT actually tried to gather a reaction from Pingo Doce in December, following criticism of the Cabazes de Natal campaign. The company declined to comment.

Recent cases, DECO explains, have indicated the need to “introduce a rule into advertising law” that defines “the minimum size of characters that must be used in various media and types of support.” This rule is important “to ensure that consumers are effectively aware of underlying conditions” that, they warn, “often go unnoticed by the consumer due to the small amount of communication with them.” Moreover, this is a rule already applied in “advertising financial products and services” and should be “casually defined to other sectors”.

On December 8th, Pingo Doce kicks off with a Christmas-themed campaign. Anyone who made a purchase over €100 is entitled to a Christmas basket with two bottles of wine; Alentejo black pork painho; a trio of biscuits covered in white, Belgian and dark chocolate; Mini crepe stuffed with goat cheese and rosemary. It turns out that, in fact, many saw their expectations cheated — and once again took to social media to point the finger at jail.

Once again, customers accused the company of “misleading advertising,” because, once again, the campaign hid small details that made basket delivery unfeasible. at first Publishing On Facebook, there is no clear indication of the need to make purchases of €100, which was not the only requirement. This batch of 100 euros could not include many products – a total of 26, between specific products at the time such as cod and olive oil and categories such as Covid-19 masks and medicines. 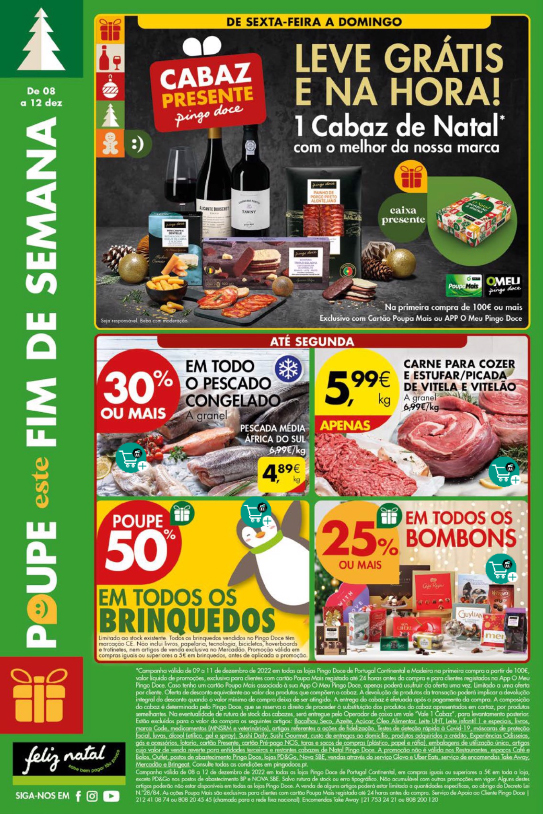 Where was that list? Visible, only in the leaflet posted on the company’s website, again in small print, in a patch of text that, even with 18 lines, takes up only a fifth of the page. Scrolling through customer reviews, it seems that this detail has escaped many. For NiT, Pingo Doce chose not to make any comment.

See also  Fuel prices are low in Madeira from Monday

The end of 2022 was also marked by a stern alarm from the Food and Economic Security Authority (ASAE) which accused large hypermarket chains of charging a higher price “repeatedly” at checkout than indicated on the shelf. “This is worth some consideration mainly because the situations occur in large economic groups, which means that this deviation should not be seen as a single act, but rather multiplied by the daily cash flow of the producer,” the inspector general told CNN. From ASAE, Pedro Portugal Gaspar.

If spotting these discrepancies and constant price fluctuations can be easier when there are only one or two products in the cart, the situation is complicated when shopping with dozens of products, resulting in receipts that are more complex and difficult to verify. Constant changes caused by inflation also make this comparison more complex – something that seems to benefit supermarket chains and hypermarkets.

“The perception is that the consumer is not making that crossing in detail. Sometimes it’s a dime, but that deviation is relevant when it hits about the 70% threshold,” the ASAE Inspector General noted.

As to whether or not there was intent in this practice, the person in charge of authority refuses to draw conclusions. “I can’t say it’s intentional, but, I mean, it’s a relatively objective situation, so some kind of justification has to be found here and some lessons can be drawn from this, because it gets repeated on top of that (…) This could be negligence, but then Mistakes had to be corrected so that they do not happen again, otherwise this is a kind of practice that must be radically opposed.

At the same time, it was the competition authority that targeted the big chains, with a fine of 5.7 million euros for fixing prices. Among the perpetrators were Bingo Duce, Delo Continent and Auchan.

According to the competition authority, the investigation led to the conclusion that “the participating distribution companies ensured alignment of retail prices in their supermarkets through contacts established through the joint supplier, without having to communicate directly with each other”.

The illegality will be maintained between 2009 and 2017. The practice, AdC says, “eliminates competition, denying consumers a better price choice, but ensuring better levels of profitability for the entire distribution chain, including suppliers and supermarket chains.”