At least eight people have been confirmed killed in wildfires on the sunny Turkish coast, seven of them in the popular holiday region of Antalya. Photos from the area show people fleeing in small private boats.

At the same time, the armed forces have sent two naval vessels to the area, while the Coast Guard is also on alert if a major evacuation is required.

Authorities have asked tourists and locals to evacuate a small town on the coast of Marmaris, a favorite holiday destination.

Flames all the way down to the beach

Residents of neighboring villages in Mugla province have taken to social media to ask for more help. On Sunday, tourists and locals took their bags on boats that had come to evacuate them.

Others waited anxiously to see if the flames would spread all the way to shore. In several places, the flames did just that.

Died in a burning house

In Turkey, two additional deaths were reported on Sunday in connection with forest fires in Antalya on the Mediterranean. A Turkish-German couple was found in their burned-down house in Manavgat in Antalya, according to the DHA news agency.

Thus, the fires have so far claimed eight lives, the vast majority of them in Antalya, which together with the Aegean province of Mugla was worst affected.

Health Minister Fahrettin Koca stated that at least 27 people were being treated in hospital for injuries after the fires, while several hundred were discharged from hospitals.

Evacuation of hotels in Bodrum

On Saturday night, several villages in Bodrum on the Aegean were evacuated, according to Mayor Ahmet Aras. Panicked tourists were evacuated from hotels here as the flames crept down the hills, among whom were 100 Russians.

Water cannons, which are otherwise used during riots, were deployed in the Bodrum fire brigade, along with helicopters and fire trucks. Civilians are also trying to help, but the fires have put out many homes.

Turkish media reported that people are being evacuated from the village of Sirtkoy in Antalya province as a result of the forest fires. Photo: AP/NTB Photo: AP

Turkey’s Minister of Forestry and Agriculture Bekir Pakdemirli wrote on Twitter that 111 forest fires are under control. His public image shows wildfires have broken out in 33 counties since Wednesday.

Forest fires are common in these parts of Turkey during the dry summer months, but this year’s fires are the most common in many years. After a record high temperature in July, when it was measured at 49.1 degrees on the island of Gezira in southeastern Turkey, it was announced that the heat wave would continue. In Antalya, it measured 42 degrees, 5-6 degrees above the average for this season, as high temperatures were announced on Monday.

Also in Greece, firefighters are battling the flames after a large forest fire broke out on Saturday near Patras in the west of the country.

Five villages were evacuated, and eight people were taken to hospitals due to the fire and smoke damage in the area, AFP reported. About 20 homes were burned, according to preliminary figures from the fire service.

Nearly 300 firefighters, two firefighters and five helicopters have been deployed to fight forest fires in Greece. The country is experiencing a new heat wave with temperatures ranging between 42 and 44 degrees, according to meteorologists.

Many homes and farms were lost in the fires, which Mayor Dimitris Kalogeropoulos described, according to AFP, as a huge disaster.

“We haven’t had a full overview of the damage yet, but there are about a dozen houses in Ziria that were burnt down, as well as farm sheds and barns, which means a lot to the residents of this agriculture-dependent region,” the mayor said.

A crisis center for evacuees has been set up in the town hall of Aygialias.

– We’ve been through hell. We were afraid that we would lose everything in the fire, says Giorgos Alexopoulos.

Among the evacuees in Greece are also many tourists.

Meanwhile, Italy is once again hit by fires after fires in Sardinia destroyed vast areas of forests, olive groves and crops last weekend.

In Spain, firefighters were deployed to put out a forest fire that broke out on Saturday afternoon near the San Juan Reservoir, 70 miles east of Madrid.

The fire brigade managed to stabilize the flames Sunday night, but they were still telling people to stay away from the popular bathing resort. 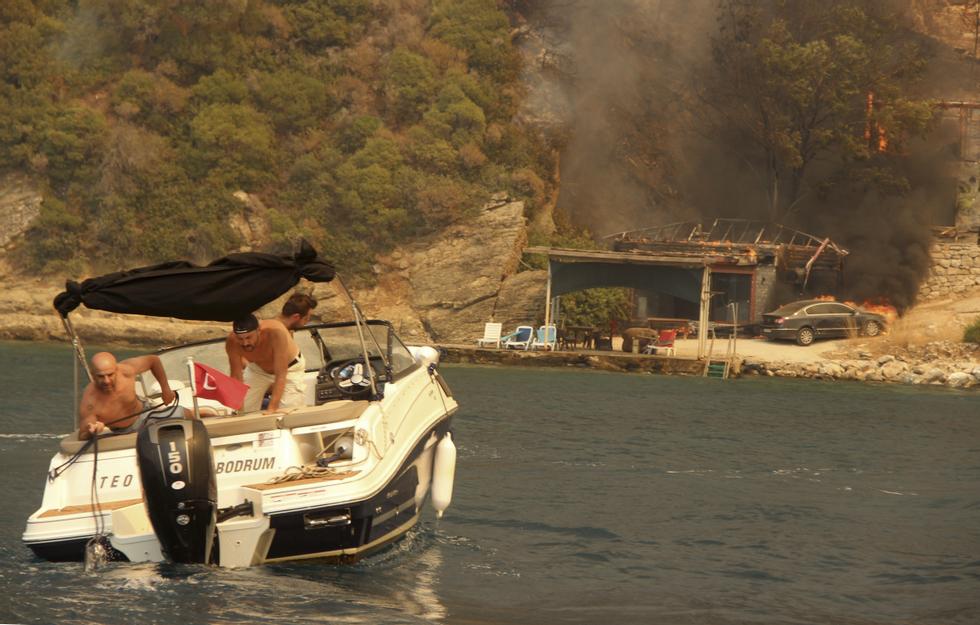 The summer paradise along the coast near Bodrum in Turkey turned into a blazing inferno as people desperately fled the flames in holiday boats on Sunday. Photo: IHA via AP/NTB Photo: AP

covid-19, corona virus | Covid-19 deaths and infections are on the rise in Europe

One million people are asked to march against the army – VG