The League and Clubs Competition Authority has fined more than 11 million euros in a process dating back to 2020, at the start of the pandemic, when clubs in the professional leagues signed an agreement not to hire workers during the year, with the aim of protecting themselves from potential Covid-19 terminations. The League of Clubs has already responded and has announced that it will resume.

The agreement has been classified by the competition authority as “restricting competition in the labor market”, but the fines imposed on clubs vary widely in terms of amounts.

AdC fines are determined by the sanctioned firm’s turnover in affected markets in years of practice. In addition, according to the competition law, fines cannot exceed ten percent of the company’s sales in the year prior to the penalty decision,” the competition authority’s statement explains.

The league, however, declared that it did not agree with the “Competition Authority’s interpretation” and argued that it was “merely an expression of the spirit of unity and strong solidarity between clubs in the context of unique adversities”. In this sense, Pedro Proenca has already announced that he will appeal the decision.

Club fines in the second league: 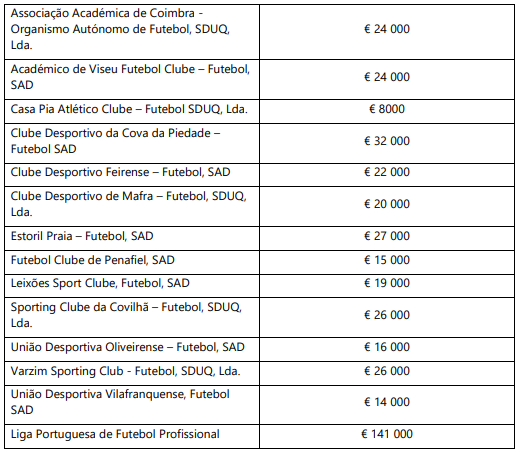 “Liga Portugal has learned, this Friday, of the first decision of the Competition Authority (AdC) on the process of administrative irregularities with reference PRC / 2020/01.

The now-published decision, which is of course subject to appeal to the courts, was indeed expected, even more so given the public positions already taken by the ACC on this issue, even while investigating the referred case.

Liga Portugal has already held a meeting with the sports associations and teams of lawyers following the case, to be held next Monday afternoon, which will work out the next steps, pending review. The process by a judicial body will leave no room for doubt as to the circumstances in which, at any time, the Portuguese League and the clubs committed any unfair competition, and the general attitude that launched this process was merely an expression of the spirit of unity and strong solidarity between clubs in the context of unique and difficult adversities severely caused by COVID-19 and never making a decision not to contract en masse, let alone a binding force, as in the AdC interpretation. “