In a recent interview, legendary Hollywood actor Matt Damon agreed with the view that the movie industry was no longer able to take risks with films due to the economic surrounding them. The interviewer quizzed Damon on the macroeconomics of the Hollywood industry in 2022 and asked why big movie producers were no longer “making films for him”.

Damon admitted that DVDs used to be “a huge part of [Hollywood’s] revenue stream”. He said that the proliferation of technological advancements, such as on-demand streaming portals, has “made that obsolete”. Even though said streaming platforms are said to be struggling at present. Consequently, Damon said movies that “used to be made” could afford to “not make all of their money” at the box office as they had DVDs to fall back on.

Film companies were content to take only a percentage of their overall revenue on a movie at the cinema, with physical DVD purchases providing a steady, medium-term drip of income to the movie firms. He said companies would plan the release of DVDs “six months” after the inaugural showing at the box office and it would be “like reopening the movie”, helping to keep the movie relevant within popular culture.

When DVDs were consigned to the history books this “changed the types of movies that could be made”, said Damon, who is now a Hollywood veteran of more than three decades. Damon discussed the pressures of spending tens of millions on print and advertising on a movie with a budget of “$25 million”. With the movie executives having the “split” revenue with the cinemas, they would need to generate “$100 million” to turn a sufficient profit – a profit that may not be sustainable based on “love affairs between two people” anymore. 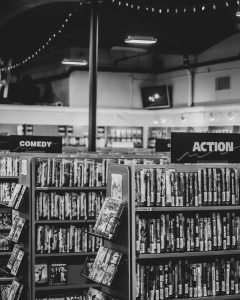 Damon said films of that ilk were now a “massive gamble” and the risk-reward ratio is no longer in their favor. Damon is making just one appearance on the big screen himself this year, performing as Loki in Thor: Love and Thunder, a Marvel Comics-based superhero movie produced by Marvel Studios. Given the links to Marvel, it’s no surprise to see this movie’s budget set at an eye-watering $250 million, generating $738.8 million at the box office to date. It’s these kinds of franchise-based releases that are fast becoming the bread and butter for film directors.

Damon’s most successful big screen appearances through the years

The Massachusetts-born star has seen the evolution of the Hollywood industry with his very own eyes. He first earnt a Hollywood breakthrough in School Ties having been an extra in a few releases in the late 1980s. A year later he would feature is Lieutenant Britton Davis in Geronimo: An American Legend. It wasn’t until the late 1990s when Damon would become hot property. He wrote Good Will Hunting with long-time pal Ben Affleck and starred alongside Robin Williams. The $10 million-budget release earnt $225.9 million at the box office alone.

That same year, Damon starred in Rounders which has become one of his cult classics. Damon played the role of Mike McDermott, a college student with a dream of making it big in the world of poker. Some say that this movie was timed perfectly to augment the online poker “boom” that occurred just a few years later. It helped to clearly explain the mechanics at the poker tables as well as the hand rankings that are integral to the rules of poker, which are undoubtedly essential to start playing.

See also  Amel Bent even "money", Florent Bogney "very strategy"? The talents of "The Voice" emptied their pockets and freed the coaches!

This was followed up by such box office classics as Ocean’s Eleven and The Bourne Identity – both of which would go on to become a series of releases, with the Bourne film series spanning no less than five movies.

The original grossed $214 million from a $60 million budget, which further helped to position Damon as a lead Hollywood actor. Both Interstellar and The Martian were more recent space-themed hits. The latter became his highest-grossing release of all time, raking in $630 million at the box office.

Through his career to date, the movies appearing Damon have generated a collective $3.88 billion at the US box office, justifying his place as one of the most successful actors of the modern-day era.