Although there are many manufacturers in the Android world, the SoCs used are from only two known sources. We’re talking about Qualcomm and MediaTek, which are constantly striving for the best range.

In its continuous collection of performance data on Android smartphones, Antutu has important and interesting information. In September, it became clear that Soc, the MediaTek Dimensity 9000+ outperformed all Qualcomm competition.

Another month with news on Antutu

Everyone knows very well how Antutu collects information about the smartphones where its application is located. This not only assesses the overall performance of the equipment, it goes much further and has metrics from many other areas relevant to the user.

In September, which is now over, Antutu saw a very important change, although it was expected by many. MediaTek Dimensity 9000+ topped the list of the most powerful smartphones and beat all Qualcomm competitions.

Interestingly, this post is taken from only one smartphone, the ASUS ROG Phone 6D, but it is enough to take the lead. In addition to the best SoC from MediaTek, this smartphone also has 12GB of RAM and 256GB of internal storage. With this device you get 1,123,036 points on AnTuTu. 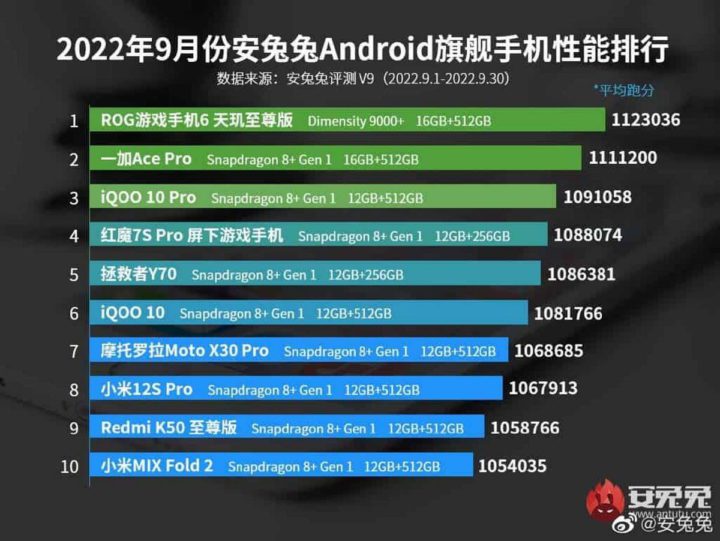 Smartphones featuring the first-generation Qualcomm Snapdragon 8+ dominate the entire rest of the list. Right below is the OnePlus ACE Pro with 16 GB of RAM and 256 GB of internal storage, then iQOO with 12 GB and 512 GB.

This change at the top of Antutu's list, especially when it comes to SoC, is clear evidence that MediaTek is making a comeback. Qualcomm should soon react to the news in this area, but until then, the 9000+ dimension clearly dominates.