Windows 11 is undoubtedly the current operating system. Microsoft is a big bet and everyone is waiting on October 5, to see what the software giant has prepared to bring users.

The truth is that the arrival and testing of this new version was a real mess for the users. To add to all this, there is now new information from Microsoft itself. Users who install Windows 11 on an unsupported computer may void the warranty.

Since the introduction of Windows 11, setting minimum requirements has been an issue for users. The early information was overwhelming and showed that many will be staying out of this Microsoft update.

The brand ended up lightening what was needed, but apparently only so that it was on the Insider Program. Time passed and everything changed again, back to the prototype, with the requirements for TPM 2.0 and Secure Boot.

Installing a new system may void your warranty

Microsoft ended up not refusing to install Windows 11 on unsupported PCs, but it's always the user's responsibility. He also warned that updates will be blocked and systems are likely to encounter problems.

The intriguing thing, now, is the message that is shown to users. Microsoft warns of potential compatibility issues that may arise with the installation of Windows 11 and that may result in the expiration of your computer's warranty. 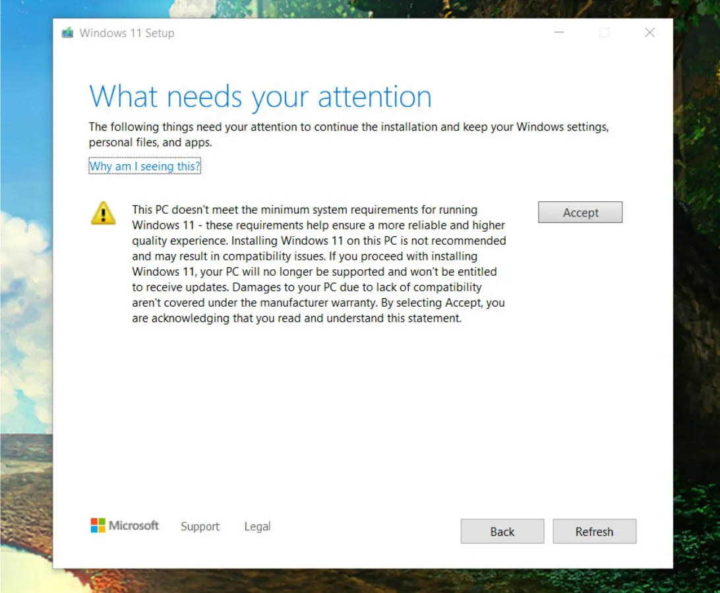 Microsoft doesn't want the system on an old PC

The strange thing about this letter is Microsoft's position. The brand appears committed to creating all possible obstacles for users, creating a scenario that, in fact, it has no control over. You'll want to scare users into preventing this installation.

It will be interesting to see how users interact. Many computers on which Windows 11 will be installed will be out of warranty and users will lose a lot. On the other hand, it is rare that situations arise that may cause problems with the installation of this Microsoft system. Let's see how society will react.