Archaeologists discovered the fossilized remains of nine specimens of Neanderthals of both sexes in a cave near Rome. Today, Saturday, the Italian Ministry of Culture said that eight of them date back to 50,000 to 68,000 years ago, while the ninth will range from 90,000 to 100,000 years old.

The important discovery was made at Grotto Guattari, a prehistoric site discovered more than 80 years ago, located about 100 meters from the Tyrrhenian Sea, on the eastern side of the promontory.

“Together with others who have been found in the past in the Guattari Cave, the total number of individuals in it reaches 11, confirming that it is one of the most important sites in the world for Neanderthal history,” the statement details.

“Neanderthal is a fundamental stage of human development, and represents the apex of a species and the first society that can be classified as a human,” explains Mario Rubini, director of the Anthropology Department at the Lazio Cultural Supervision Authority. It is believed that the result will shed light on the history of settlement in Italy.

The cave was discovered by chance in February 1939 by workers who removed stones from the property of the Guattari family in San Felice Circeo, in the Lazio region, and the cave has been the subject of research since October 2019.

Shortly thereafter, paleontologist Albert Carlo Blanc discovered a well-preserved Neanderthal skull, in addition to other fossils, such as the remains of aruchs (an extinct species of cattle), elephants, rhinos, wild deer, rock bears, wild horses and hyenas, many more appearing on them. Signs of being bitten. 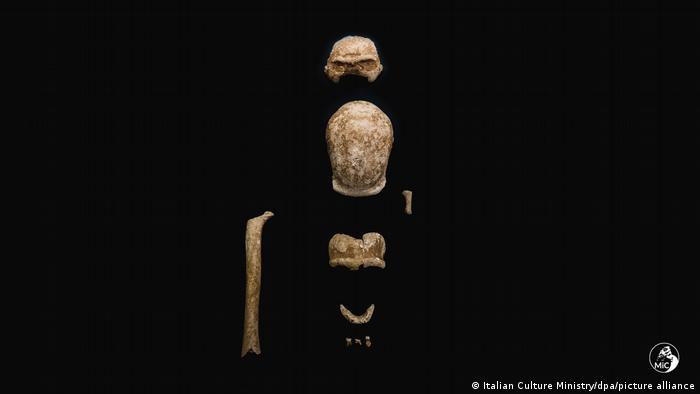 Neanderthal is the closest known human ancestor. In 2016, scientists concluded that samples from the Altai Mountains in Siberia shared 1% to 7% of their genetic material with the ancestors of modern humans.

The species – which traces its name to the valley in the Düsseldorf region, where it was first recognized – became extinct about 40,000 years ago. Although the exact causes are unknown, climate change and increased competition with Homo sapiens appear to be among the factors.