Very briefly, Nintendo has just confirmed that its new console, which will likely be the successor to the Switch, will enter the market before the year 2100. Do you think this makes sense? No? it’s normal! Especially when it comes to Nintendo release dates in terms of new hardware.

Nintendo has plans for a new console, aimed for…20XX?

So, the Nintendo Switch OLED hasn’t been on the market for a month now, but the industry is already trying to pull information about what’s next. After all, the OLED model only brought a slight redesign, the OLED display, which while impressive, doesn’t revolutionize the way players experience the Japanese giant’s gaming ecosystem.

So, after a huge success in the form of the Switch, everyone wants to know what’s next!

Well, in a presentation to investors, Nintendo mentioned some plans regarding its future in the world of consoles. Revealing some slides, where we can see that there has already been some development, even in terms of release dates, but of course the thing appears with a hidden date.

Finally, the release year of the new console 20XX appears.

Interestingly, the Nintendo Wii U, originally released in 2012, does not appear on the slide … Does the Japanese giant want players to forget about this failure? 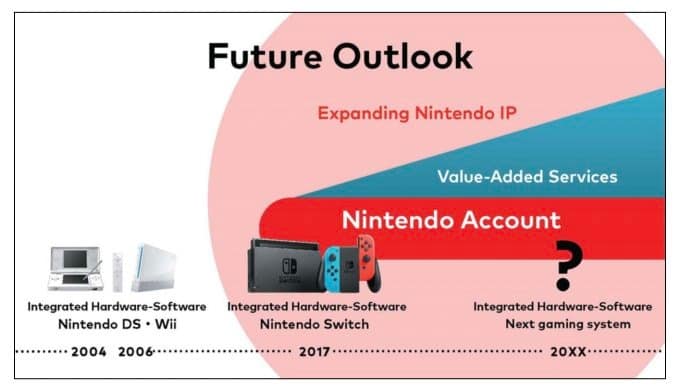 However, of course, the Switch won’t last forever. Nintendo should already set up succession, bet on higher graphics quality, and of course support the coveted 4K resolution. When will we get a new console? The company hides, as you know, the cards in its hand. But one thing is for sure, it won’t take that long.

See also  PES happens to be called eFootball and the official promo will give you nightmares!