It seems that the smartphone market has started 2022 with some declines. At least that’s what data from market analysis firm Canalys suggests, which points to a drop in new unit shipments.

According to company datathe smartphone market recorded an 11% decrease in shipments of new units compared to the same period in the previous year.

Samsung continues to stay on top of the table, accounting for 24% of all shipments worldwide in the last quarter. This number represents an increase of 19% compared to the previous quarter, and a year-over-year growth of 22%.

Apple comes in second with an 18% share of shipments over the same period and an annual growth of nearly 15%.

According to analyst Sanyam Chaurasia, Samsung will ramp up production of entry-level devices, such as the Galaxy A line models, to better compete in the affordable market, focusing on premium devices for those who want the best of the best. . Apple, in turn, kept production of the iPhone 13 to continue to maintain sales in the market. 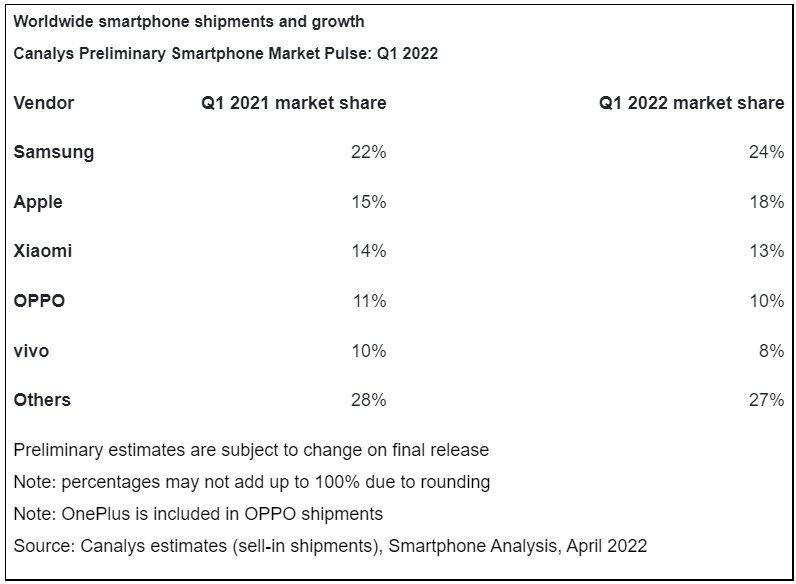 Chaurasia says the iPhone SE could make a modest impact on the market, especially for those looking for mid-range devices. However, these statements contradict what has been said in some of the rumors in recent days, about how iPhone SE sales will fall short of expectations.

As for Xiaomi and OPPO, they continue to appear in the table, but with a slight decrease in annual growth.